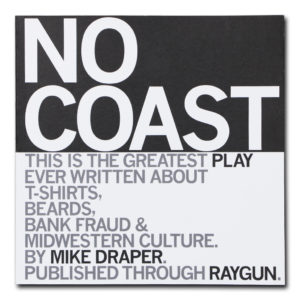 PLOT: It is Des Moines on Friday, August 21st, 2015: the State Fair has ended and with the Iowa Caucuses only a few months away, the political race on both sides is heating up — Clinton, Bernie, Bush, Cruz, Rubio, and Trump. Against that backdrop, Nick Strietman feels like his clothing store, No Coast, is on the cusp of a region-wide expansion. With a wealthy investor now behind the store, Nick is amassing national attention and reaching for the company’s next rung. But in the course of a few hours, everything seems to turn upside down.

BACKSTORY: The first play ever written by Mike Draper, the owner and founder of RAYGUN, NO COAST is not the story of RAYGUN. Instead, the play is a reimagining of a store like RAYGUN, and all that goes into it.

“Since opening RAYGUN,” Mike explains, “I’ve been fascinated by the environment. People come and go regularly, and you’re building your own business world, though so connected to the world around you. NO COAST is a humorous look at t-shirts, beards, bank fraud, & Midwestern culture. It could very well be the greatest play ever written about t-shirts, beards, bank fraud, & Midwestern culture — and that is a crowded field of competitors!”

All Text and Images are Copyright Mike Draper, 2016